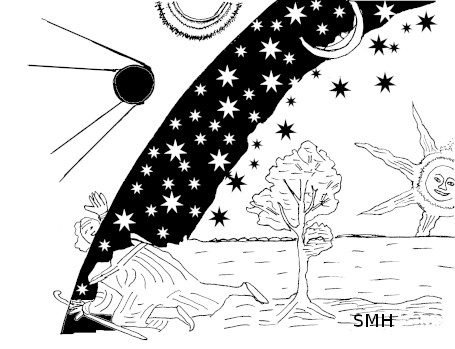 When we say that a planet runs around a star, strictly speaking this is only half the truth. Rather, it is that both are running around a common center of gravity, so the star is also performing a small elliptical motion.

If the planet revolves in the plane of view, this results in a rhythmic motion of the star toward and away from us. Astronomy measures this so-called radial component of the star’s motion as the rhythmic blue or red shift of its spectral lines.

This effect of wavelength change in radial motion (toward us or away from us), which we know acoustically as the Doppler effect [after the Austrian Hans Christian Doppler], we recreate in experiment by placing our spherical light eccentrically on a (glass) pie plate.

(Originally, I wanted to find an electrical solution for the locomotive and lamp always facing each other, but two resourceful ninth graders solved things mechanically.)